'So was the Word made incarnation / In Mary’s womb, a son.' The Immaculate Conception 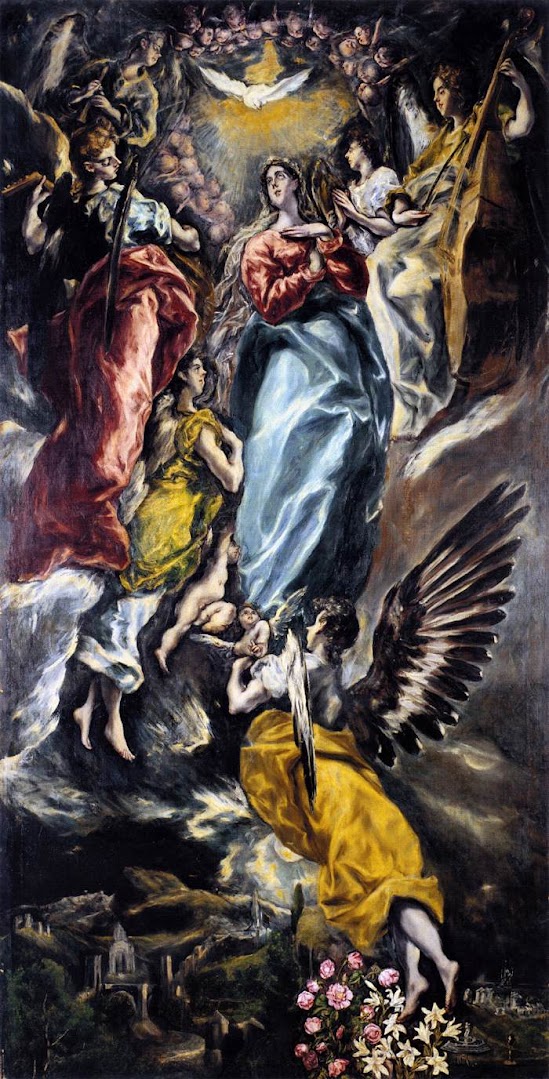 The Virgin of the Immaculate Conception
El Greco [Web Gallery of Art]
The Solemnity of the Immaculate Conception, observed on 8 December, is a holyday of obligation in many countries, eg, Ireland, the Philippines.
Readings (New American Bible: Philippines, USA)
Readings (Jerusalem Bible: Australia, England & Wales, India [optional], Ireland, New Zealand, Pakistan, Scotland, South Africa)
Gospel Luke 1:26-38 (New Revised Standard Version, Anglicised Catholic Edition, Canada)
In the sixth month the angel Gabriel was sent by God to a town in Galilee called Nazareth, to a virgin engaged to a man whose name was Joseph, of the house of David. The virgin’s name was Mary. And he came to her and said, ‘Greetings, favoured one! The Lord is with you.’ But she was much perplexed by his words and pondered what sort of greeting this might be. The angel said to her, ‘Do not be afraid, Mary, for you have found favour with God. And now, you will conceive in your womb and bear a son, and you will name him Jesus. He will be great, and will be called the Son of the Most High, and the Lord God will give to him the throne of his ancestor David. He will reign over the house of Jacob for ever, and of his kingdom there will be no end.’
Mary said to the angel, ‘How can this be, since I am a virgin?’ The angel said to her, ‘The Holy Spirit will come upon you, and the power of the Most High will overshadow you; therefore the child to be born will be holy; he will be called Son of God. And now, your relative Elizabeth in her old age has also conceived a son; and this is the sixth month for her who was said to be barren. For nothing will be impossible with God.’ Then Mary said, ‘Here am I, the servant of the Lord; let it be with me according to your word.’ Then the angel departed from her. 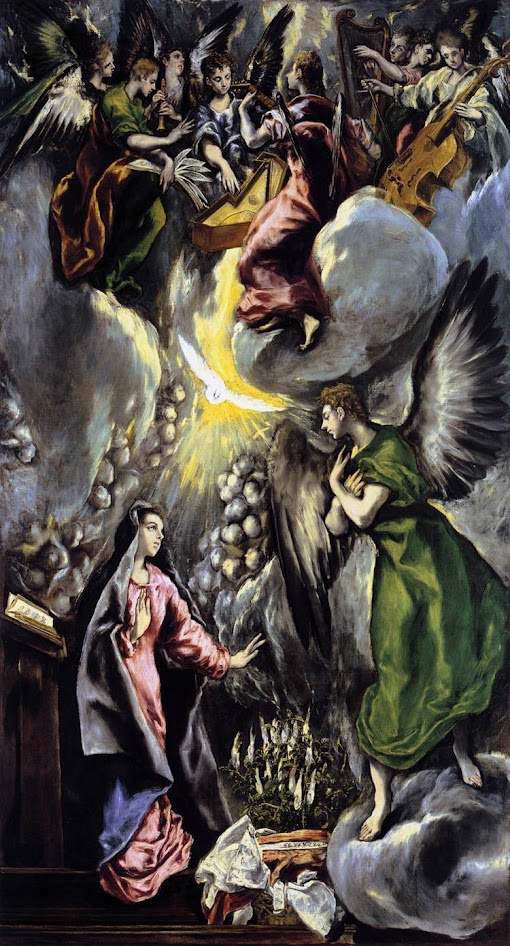 The Annunciation
El Greco [Web Gallery of Art]
This is but one of many paintings of the Annunciation by El Greco.
The Incarnation
by St John of the Cross
Translation from the Spanish original by Roy Campbell
Then He summoned an archangel,
Saint Gabriel: and when he came,
Sent him forth to find a maiden,
Mary was her name.

Only through her consenting love
Could the mystery be preferred
That the Trinity in human
Flesh might clothe the Word.

Though the three Persons worked the wonder
It only happened in the One.
So was the Word made incarnation
In Mary’s womb, a son.

So He who only had a Father
Now had a Mother undefiled,
Though not as ordinary maids
Had she conceived the Child.

By Mary, and with her own flesh
He was clothed in His own frame:
Both Son of God and Son of Man
Together had one name.

This poem is in The Divine Office (Breviary) approved by the hierarchies of Australia, England and Wales, Ireland. I found it online here.
Ave Maria
Setting by Franz Biebl, Sung by Voces8

Angelus Domini nuntiavit Mariae et concepit de Spiritu sancto.
(The angel of God declared unto Mary and she conceived of the Holy Spirit.)
Ave Maria, gratia plena, Dominus tecum. Benedicta tu in mulieribus, Et benedictus fructus ventris tui, Jesus.
(Hail Mary, Full of grace, the Lord is with you. Blessed are you among women, and blessed is the fruit of your womb, Jesus.)
Sancta Maria, Mater Dei, ora pro nobis peccatoribus, Sancta Maria, ora pro nobis, nunc et in hora mortis nostrae. Amen.
(Holy Mary, Mother of God, pray for us sinners, Holy Mary,
pray for us now and in the hour of our death. Amen.)
Posted by Fr Seán Coyle at 22:11

Dearest Father Seán,
Wishing you a very meaningful December 8 and may our Heavenly Mother watch over her World—we all need her so badly!
https://mariettesbacktobasics.blogspot.com/2022/12/mary-most-powerful-woman-in-world.html
Hugs,
Mariette