'I will raise up shepherds . . .' Sunday Reflections, 16th Sunday in Ordinary Time, Year B Flock of Sheep in the Campagna, Claude Lorrain
Akademie der bildenden Künste, Vienna [Web Gallery of Art]
'They were like sheep without a shepherd.'

The apostles gathered around Jesus, and told him all that they had done and taught. He said to them, “Come away to a deserted place all by yourselves and rest a while.” For many were coming and going, and they had no leisure even to eat. And they went away in the boat to a deserted place by themselves. Now many saw them going and recognized them, and they hurried there on foot from all the towns and arrived ahead of them. As he went ashore, he saw a great crowd; and he had compassion for them, because they were like sheep without a shepherd; and he began to teach them many things.

Fr Ragheed Aziz Ganni
(20 January 1972 - 3 June 2007)
I will raise up shepherds over them who will shepherd them, and they shall not fear any longer, or be dismayed, nor shall any be missing, says the Lord (Jeremiah 23:4. First Reading).


On at least six occasions during his recent nine-day pastoral visit to Ecuador, Bolivia and Paraguay, Pope Francis asked the people to pray for him, as he did when he addressed the people in St Peter's Square for the first time as pope in 2013. Perhaps he has constantly in mind two statements in today's First Reading from the Prophet Jeremiah: 'Woe to the shepherds who destroy and scatter the sheep of my pasture! says the Lord . . .  I will raise up shepherds over them who will shepherd them, and they shall not fear any longer, or be dismayed, nor shall any be missing, says the Lord.'

Jesus shows his concern for the apostles when they returned from the mission on which he had sent them as shepherds when 'He said to them, “Come away to a deserted place all by yourselves and rest a while.”' 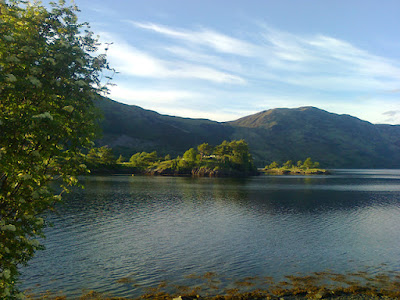 Ballachulish, Scotland
'Come away to a deserted place all by yourselves and rest a while.'


Perhaps we can pray in a special way for our priests as we take part in Mass this Sunday. We have countless models of priests who have been worthy shepherds, evening to laying down their lives for the flock they were called to serve. One such shepherd is an Iraqi priest with Irish connections, Fr Ragheed Ganni, assassinated along with three subdeacons, his cousin Basman Yousef Daud, Wahid Hanna Isho, and Gassan Isam Bidawed, after celebrating Mass in Mosul, Iraq, on Trinity Sunday, 3 June 2007. 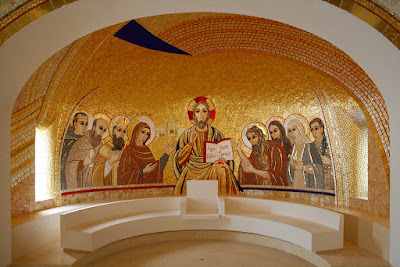 An engineer by profession, Ragheed answered God's call to become a priest and studied theology in Rome, before and after his ordination in 2003. While there he stayed at the Pontifical Irish College where he became known as 'Paddy the Iraqi', 'Paddy' being a common nickname for men named Patrick, after Ireland's national patron, and a humorous generic name for any Irishman. As a priest still studying in Rome he spent part of his summers as a member of the staff at Lough Derg, known as St Patrick's Purgatory, a place of penitential pilgrimage in Ireland. 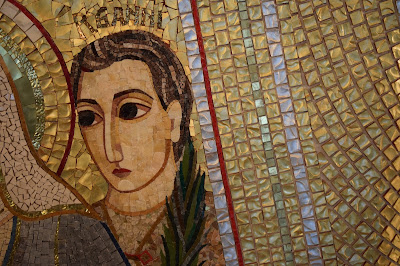 Yet this young Iraqi who, according to the statement of one friend after the priests' murder, 'knew where the best pizza in Rome was', chose to go back to his own country, knowing that his life might be in danger. He spoke of this at a Eucharistic Congress in Bari, Italy, two years before his death. The theme of the Congress was Without Sunday We Cannot Live, 'Sunday' meaning most especially the celebration of Holy Mass.


Mosul Christians are not theologians; some are even illiterate. And yet inside of us for many generations one truth has become embedded: without the Sunday Eucharist we cannot live.
This is true today when evil has reached the point of destroying churches and killing Christians, something unheard of in Iraq till now. In June 2004, a group of young women were cleaning the church to get it ready for Sunday service. My sister Raghad, who is nineteen, was among them. As she was carrying a pale of water to wash the floor, two men drove up and threw a grenade that blew up just a few yards away from her.
She was wounded but miraculously, survived. And on that Sunday, we still celebrated the Eucharist. My shaken parents were also there. For me and my community, my sister’s wounds were a source of strength so that we, too, may bear our cross.
Last August in St Paul’s Church, a car bomb exploded after the 6 pm Mass. The blast killed two Christians and wounded many others. But that, too, was another miracle – the car was full of bombs but only one exploded. Had they all gone off together, the dead would have been in the hundreds since 400 faithful had come on that day.
People could not believe what had happened. The terrorists might think they can kill our bodies or our spirit by frightening us, but, on Sundays, churches are always full. They may try to take our life, but the Eucharist gives it back.
On 7 December, the eve of the Immaculate Conception, a group of terrorists tried to destroy the Chaldean Bishop’s Residence, which is near Our Lady of the Tigris Shrine, a place venerated by both Christians and Muslims. They placed explosives everywhere, and a few minutes later blew the place up. This and fundamentalist violence against young Christians has forced many families to flee. Yet the churches have remained open and people continue to go to Mass, even among the ruins.
It is among such difficulties that we understand the real value of Sunday, the day when we meet the Risen Christ, the day of our unity and love, of our (mutual) support and help. There are days when I feel frail and full of fear. But when, holding the Eucharist, I say ‘Behold the Lamb of God, who takes away the sin of the world’, I feel His strength in me. When I hold the Host in my hands, it is really He who is holding me and all of us, challenging the terrorists and keeping us united in His boundless love.
In normal times, everything is taken for granted and we forget the greatest gift that is made to us. Ironically, it is thanks to terrorist violence that we have truly learnt that it is the Eucharist, the Christ who died and risen, that gives us life. And this allows us to resist and hope.
[This appeared in The Sacred Heart Messenger (April 2008), a publication of the Irish Jesuits.] 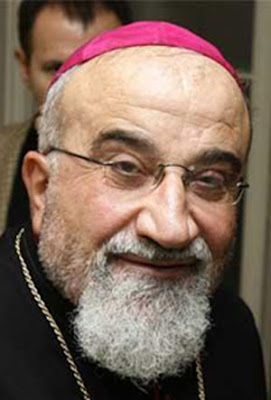 Father Ragheed was secretary to Archbishop Rahho, The Chaldean Archbishop of Mosul. Most Catholics in Iraq and Syria belong to the Chaldean Catholic Church, in full communion with Rome. 'The Eucharist, the Christ who died and risen, that gives us life' was celebrated every Sunday in Mosul for 1,600 years - until June 2014 when the ISIS forces drove out the remaining Christians.

The words of Jeremiah, 'I will raise up shepherds over them who will shepherd them', have surely been fulfilled in the lives and deaths of such priests as Fr Ragheed Ganni and Archbishop Rahho. As we thank God for them and for countless other faithful priest-shepherds, let us continue to pray for all our priests and for Christians who are being persecuted for their faith.

John Rutter's setting of The Lord is my shepherd, Psalm 22[23], which is used as today's Responsorial Psalm.